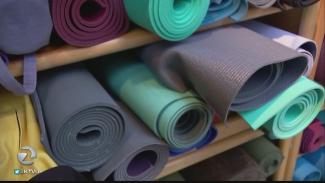 Fox News KTVU features a study at UCSF’s Osher Center for Integrative Medicine, with subjects who have major depression and found their condition eased with regular yoga classes.

“It’s the very first study in the U.S. that’s looking at yoga as a sole treatment for diagnosed major depression,” lead researcher Dr. Sudha Prathikanti told KTVU. Prathikanti evaluated men and women, age 18 to 72. The participants were diagnosed with major depression, but it was mild or moderate, not severe.

Half of them learned about yoga in lectures. Half actually did yoga in structured classes. After eight weeks? “60 percent of the people in the yoga group got remission, which means minimal to zero symptoms of depression, a dramatic decrease,” said Dr. Prathikanti, “and the control group only got 10 percent remission.” None of the patients were taking medication, or in psychotherapy, so the effect was solely yoga.